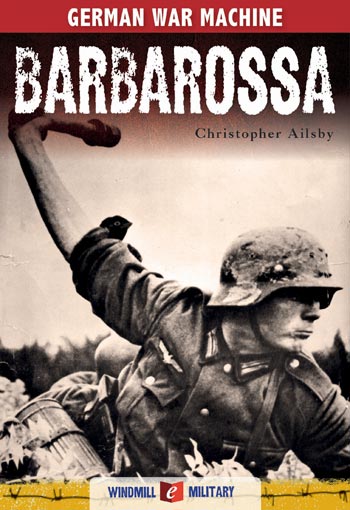 On 22 June 1941, Adolf Hitler launched Operation Barbarossa, the German invasion of the Soviet Union. Over 3,000,000 men, more than 3,000 tanks, and over 2,000 aircraft advanced east to begin the Nazi Party’s crusade to destroy Bolshevism and carve out “living space” for the Thousand Year Reich. During the first few weeks of the invasion, the Germans achieved staggering results, as whole Soviet armies were annihilated, thousands of aircraft were destroyed on the ground, and hundreds of thousands of enemy soldiers were captured. Yet as the Wehrmacht advanced deeper into Mother Russia, the tables began to turn. Barbarossa describes the experience of war on the Eastern Front: the choking dust and endless steppes of the Ukraine, the mud that made movement by wheeled and tracked vehicles all but impossible, and the numbing Russian winter, which killed thousands of ill-equipped German soldiers.

Christopher Ailsby is a freelance writer and collector of military memorabilia. His areas of expertise are the Third Reich, the German Army in World War II and the Waffen-SS: The Unpublished Photographs. He currently lives in the east of England.