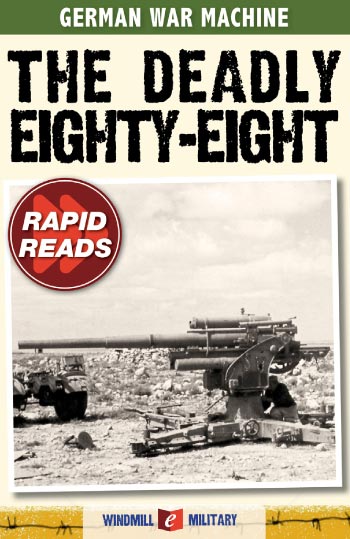 The Deadly Eighty-Eight is a must-read about the gun that made Allied tank crews lose sleep at night in all theatres. Devised as a multi-purpose weapon, the 88 (called 8.8 by the Germans) was good in its anti-aircraft role, but unsurpassed as a tank killer. In North Africa, good visibility and flat terrain meant that British tank crews were desperately vulnerable to its high-velocity rounds; on the Russian steppes even the main armament of the T-34 could not compete with the range of the 88. And during the Normandy campaign, 88s made short work of the Sherman tank.

I liked this book because it gives you a big colour diagram that’s unusual in current ebooks. I’d give it 5 stars but I think there should be more accounts from the gunners who manned the beast telling us what it was like to sit up in the air and firing at the enemy.